Virgin has brought back its popular offer of six months of free Netflix across its Mix, Full House and VIP TV and broadband bundles.

The offer is open to any new customers taking a joint broadband and TV package with Virgin on a 12 month minimum contract.

It comes with a £20 installation fee, so watch out for that.

From Wednesday 1 November until Monday 18 December 2017 you can get a £7.99 a month Standard Netflix subscription, which gives you the streaming service across two screens, bundled together with Virgin broadband and TV.

The streaming service is going from strength to strength.

It has the latest hit releases like season two of Stranger Things, as well as raising over a billion pounds to fund new shows.

The Netflix subscription included with Virgin lasts six months and is a 30-day rolling contract, so you can cancel at any time.

Each of the deals below runs on a 12 month broadband and TV contract.

How to watch Netflix on Virgin 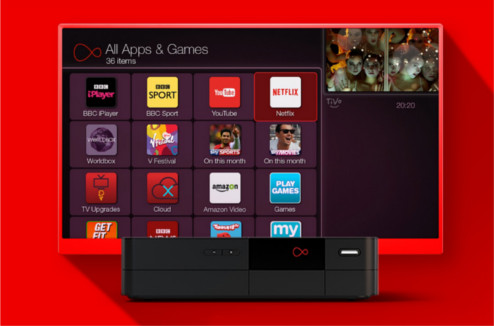 On laptop, tablet, phone or PC

Head over to https://www.netflix.com/ and log-in using your four digit PIN number.

On TV or TiVo

On Tivo and TV a shortcut to the Netflix app is on channel 204.

Again you may be asked for your four digit PIN number.

You can also access Netflix by pressing Home on your Tivo remote then press Apps¬All Apps & Games¬Netflix.

Pro Tip: If you’re considering this offer, it’s worth setting up a Netflix account as it offers your first month free on a trial basis.

Then if you add the Virgin voucher code on top you’ll get seven months of free Netflix instead of six.

How to activate your free Netflix offer

Virgin say that customers will be emailed a voucher code and instructions on how to redeem the voucher within five days of their services being installed.

Then you need to head over to www.netflix.com/virginmedia to finish the job and start watching boxsets and movies.

It’s not guaranteed to work as soon as your broadband is installed: there’s a wait of up to five days before you can activate the offer.

According to Virgin’s customer forum, it’s quite common not to receive the email within the five-day time frame. If you’ve signed up and you’ve not had your Netflix voucher code, call Virgin customer services on 0345 454 111.

Just note that 0345 numbers cost up to 9p a minute from landlines. If you’re calling on a mobile with inclusive minutes, 0345 numbers are counted as the same as 01 and 02 numbers so will not cost you anything extra.

Can the internet cope with mass self-isolation?

With traffic at unprecedented highs, can the web's infrastructure cope?

The UK’s biggest broadband providers have agreed not to limit internet allowances during the current crisis.

The rise and rise of Chinese tech firms

What are the best streaming services for children?

Why do I need to use One Time Passwords?

Must we forever put up with those extra layers of security...

Can you access the Dark Web without the Tor browser?