Twitter has the power to suspend people from their platform for various reasons from general hate speech to targeted harassment. The platform bans people for all sorts of reasons, sometimes forever, often just for 24 hours. When it’s temporary it’s known as being put into ‘Twitter jail’.

Sometimes you might be suspended or banned if multiple accounts report you for inappropriate behaviour. Twitter can also lock your account if you tweet too much within a certain amount of time. This is to crackdown on bots.

But this is an issue if you’re innocent and just a victim of people falsely reporting you. Luckily, you can appeal if you think you were punished unfairly.

Banned and desperate to see your profile? Or just want to see that tweet from your problematic fave? Here’s a jailbreak tactic for you!

You might be thinking you’re about to go all ‘Angelina Jolie in Hackers’, but it’s surprisingly easy to get around this. That’s thanks to this lifesaver of a tool called a ‘bookmarklet’.

To add a bookmarklet to Chrome all you have to do is:

It’s basically the same for Firefox. The only difference is that when you right-click on the bookmarks bar, you select ‘New Bookmark’ instead of ‘Add page’.

Looks terrifying, but it isn’t – just paste this bookmarklet: 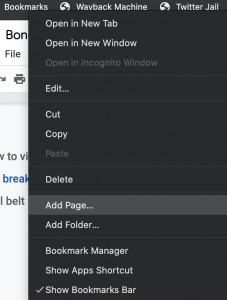 Step 2.  (Paste Bookmarklet into ‘URL’ and name it)

So if Donald Trump was (surprisingly) from Twitter, you would enter ‘realdonaldtrump’ and see Google’s last collected data from the page. This collection of data is known as a cache.

How does it work?

The bookmarklet basically reloads a previously saved version of the Twitter profile, a pre jail version. It gets this version from Google.

When we mentioned the term cache before, it’s because that’s what the bookmarklet accesses to reload the old page. It’s basically like reloading an old saved level before you died in a game.

It’s a little unpredictable which version of the profile you will get. Google doesn’t cache pages in an orderly way, it seems pretty adhoc. So you might find some accounts with tweets leading up to their ban within the hour, or some days old.

The bookmarklet also logs you out of Twitter when you access the old page. This means you can’t click on the ‘Tweets & Replies’, ‘Media’ or ‘Likes’ tabs. So all you can do is scroll the main feed.

Who will cancel the cancelled?

For some Twitter is an invaluable networking tool, for most it’s a time sucking hellhole. Between pious ‘cancel culture’ and heartless harassment, the platform certainly has its flaws. So to see behind the curtain of a suspended Twitter account scandal is very interesting.

And while it is limited, this tool does what it says on the tin. It lets you see tweets from a suspended account. It’s also fast and easy.

So this might be the perfect tool for a world obsessed with ‘cancel culture’ and ‘problematic faves’. A quick and easy tool that helps you take a second to contextualise hearsay before you make a snap judgement.

Talking of quick and easy tools, have you tried our postcode checker yet? We have more choice of the best broadband deals than ever, whether you want to save money or upgrade.