A large telecoms group selling at the budget end of the market and providing broadband, calls, TV and mobiles.

Enter your postcode to see which TalkTalk deals are available in your area. 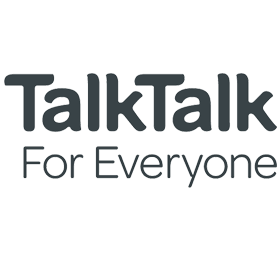 Is TalkTalk broadband any good?

We have reviews and ratings from 51 verified customers of TalkTalk broadband.

We surveyed new customers 60 to 120 days after switching to TalkTalk - here's what they told us:


On average, people switching to TalkTalk saved around £5.38 per month, and rated their TalkTalk broadband 8.4/10.

New customers told us that they waited around less than 2 weeks between ordering and getting set up with TalkTalk.

To read more about what customers think of TalkTalk's broadband deals, check out our TalkTalk reviews page for 48 more reviews and in-depth ratings data.

Everything you need to know about TalkTalk

TalkTalk started life in Leeds in 2003 as a subsidiary of Carphone Warehouse. In 2010 it split away and became its own company.

TalkTalk’s ADSL broadband with maximum speeds of 17Mbps and an average speed of 11Mbps is aimed at the value end of the market.

Adding Anytime Calls to your broadband bundle will cost £12 a month. A full list of TalkTalk phone call prices is here.

TalkTalk has its own on-demand TV services using the Youview and Youview+ Freeview HD box.

The basic package gives you the standard Youview Freeview box with which you can pause and rewind up to 30 minutes of live TV.

The more pricey TV Plus plan gets you the upgraded Youview+ box, which allows you to pause and record 90 hours of HD content, as well as rewinding up to two hours of live TV.

You’re looking at around 150 channels in total, including premium entertainment like MTV, Sky One, Sky Two and Sky Living, as well as UK Gold and Comedy Central.

Netflix is available as an app through Youview.

One-month TV Boosts are also available. These are channel collections under the likes of Entertainment, Kids or Sports so you can try out Sky Sports for a month, or Sky Cinema, or Nickelodeon, Boomerang and Disney Channel.

TalkTalk sells the same two kinds of fibre as every other provider using Openreach: up to 38Mbps and up to 76Mbps. These, like TalkTalk’s ADSL, are aimed towards the budget-conscious customer.

If price is the single biggest factor in picking your next broadband provider then TalkTalk might work for you. Their TV Boosts offer a cheaper way to get Sky Sports or Sky Cinema on one-month contracts.

Not sure if TalkTalk is right for you? Have a look at what else you could get with our best broadband deals and compare before you order.