Durham Chief Constable Michael Barton suggested creating a system similar to A+ to F energy efficiency ratings, to tell customers what security features a device has before they buy.

He also questioned why so-called Internet of Things devices are not assessed by the industry, and said manufacturers should be responsible for developing the rating system.

One potential obstacle is that, unlike energy efficiency ratings, security is subject to change as hackers develop new techniques and manufacturers attempt to patch problems with updates.

How ‘smart’ is a smart fridge?

Smart fridges are the ideal synthesis of food storage and Silicon Valley utopianism.

They are essentially a mobile app store with an integrated four-pinter of semi-skimmed. 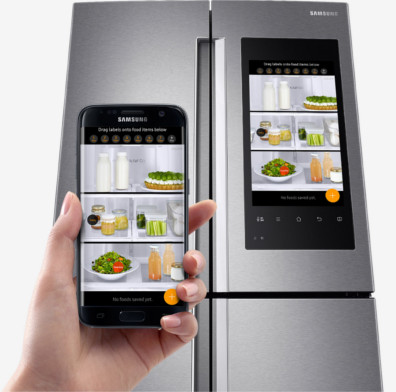 And it’s not just fridges, other kitchen appliances including kettles and toasters are also Wi-Fi enabled, raising the question, why?

The answer is surprisingly philosophical. Smart fridges allow you to see the contents of your refrigerator via an app, putting paid to the age-old question of whether the light really goes off. As for other IoT devices, the applications – particularly Wi-Fi toasters – are less clear.

IoT devices have many potential risks, which are becoming increasingly apparent. Devices are often unsecured, and can be vulnerable to hacking. Leaving your butter and luncheon meat unprotected could lead to spoilage, or worse, if aspiring Guilfoyles have their way.

Other security fears involve the collection of user data, allowing any number of people or organisations to see what you do at home.

The Amazon Echo, which can be found in over 10 million households, includes features used to monitor conversations and collect data at all times, uploading it to a cloud storage system.

In December 2016, hundreds of IoT devices, including cameras and baby monitors, were conscripted into the Mirai botnet – an army of unsecured devices, compromised by hackers – in order to attack a web server in New Hampshire. The attack disabled dozens of well-known websites and caused chaos worldwide.

Analysts say there will be over 21 billion smart devices sold by 2020, so families should know exactly how safe or dangerous the device is they’re installing at the heart of the home.

Technical Issues / Online or offline data storage – which is best?

The choice between online or offline data storage is increasingly being made for us, but each option has its own merits and pitfalls

Read: 'Online or offline data storage – which is best?'

A beginner’s guide to broadband routers

Broadband routers are the gateway to the internet, but they can be a source of mystery for people unfamiliar with this technology.

What happens if my broadband provider goes out of business?

It’s a cause for alarm when an ISP ceases trading, but consumers shouldn’t panic, since other companies will often step into the breach.

Read: 'What happens if my broadband provider goes out of business?'

A beginner’s guide to VPNs

Read: 'A beginner’s guide to VPNs'